Looking for information on Avalanche’s (AVAX) emission schedule? Finding it online is next to impossible, so we investigated and made some calculations.

AVAX launched in September 2020 as a Layer 1 protocol, debuting at a price slightly above $5 before dropping to a little more than $3. It peaked in November 2021 above $134 before falling back to Earth, sitting at about $20 as of July 2022. The project minted 360 million AVAX tokens at its inception with vesting periods ranging from one to 10 years.

Ava Labs — headquartered in Brooklyn, New York, and led by Cornell Professor Emin Gun Sirer — serves as the network’s developer. And because the chain allows developers to use subnets — their own blockchains — it has attracted an influx of projects over the last year, making it one of the top 20 cryptocurrencies by market capitalization.

According to Messari estimates — which aren’t quite correct, but do provide a baseline for calculation — circulation should reach 600 million by July 12, 2027. That will constitute a little more than 83 percent of AVAX’s hard cap of 720 million.

RELATED: How to Bridge Tokens to Avalanche (AVAX)

Avalanche “burns” transaction fees, taking the tokens paid by those who transact on the network and eliminating them from circulation. Snowtrace offers an explorer where you can view the historical record of tokens burned each day dating back to Sept. 24, 2020, while BurnedAvax tracks the overall tally. As of July 15, 2022, the bottom-line number stood at 1,879,611. (May 11 of this year set the record with 29,511 tokens burned.) That means a daily average of 3,326 tokens have been removed from circulation in the 565 days since tracking began.

The numbers mean an average burn rate of 1,213,990 tokens each year, worth 4.2 percent of the supply as of July 2022. In the event that more projects move to the network, transaction fees will increase due to heightened traffic, making it possible the burn rate will rise in the future.

If you’d like to calculate what the numbers mean for the future price of AVAX, you can do so if you come up with a projection for its market capitalization. Token price is equal to market cap divided by number of tokens in circulation.

After crunching the numbers, we find what the price would look like under either market cap in both years. 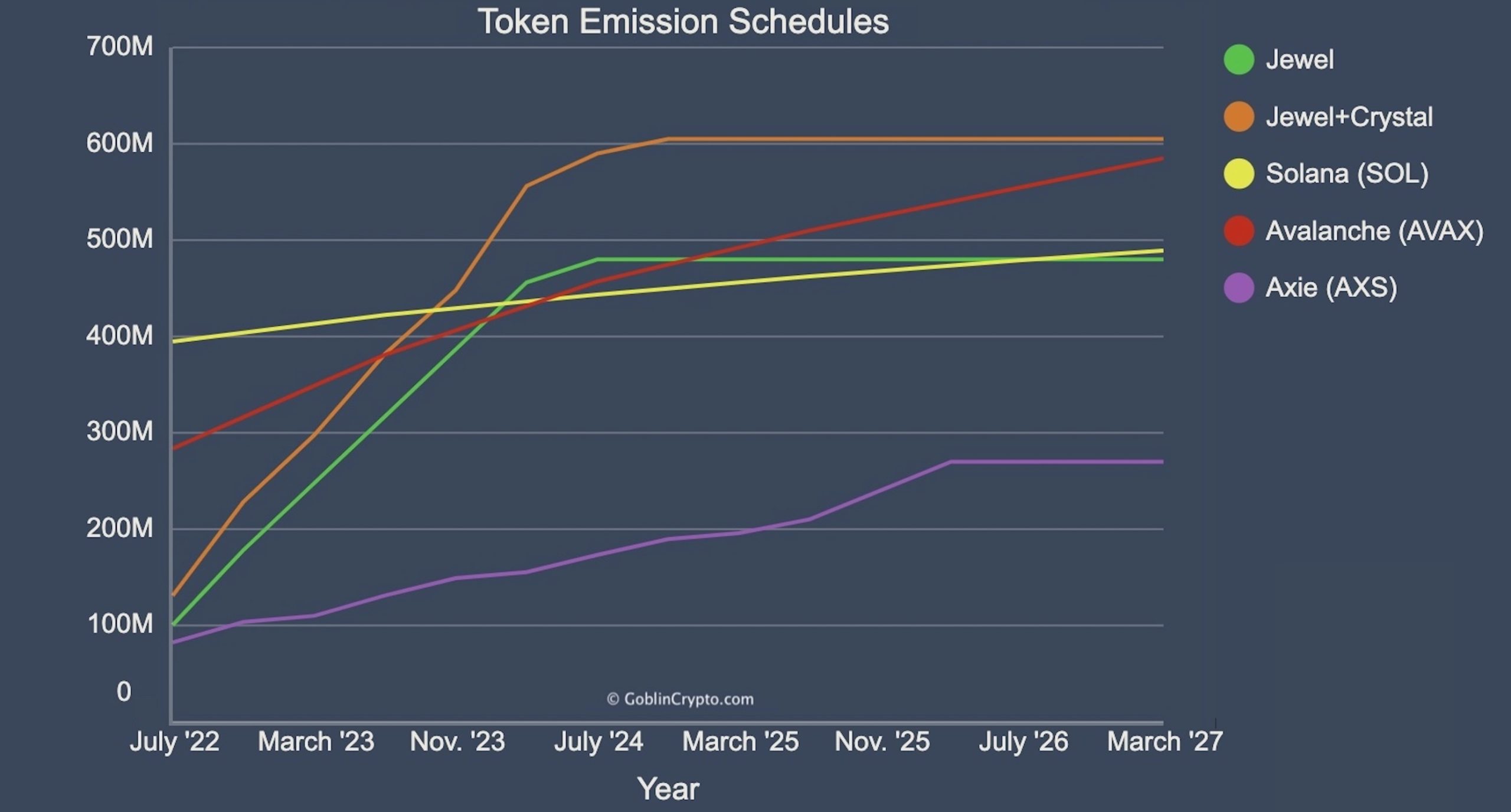 RELATED: Solana’s Emission Schedule: Expect Supply to Increase 43% Over the Next 5 Years

There are variables that will affect AVAX’s rate of inflation. The top variable is the number of tokens distributed as staking rewards. Those account for the bulk of growth in upcoming years. Of 317 million tokens scheduled to hit the market between 2022 and 2017, 192 million will come from staking payments — or 60 percent. Avalanche allows validators to set the reward rate through governance. (Validators are required to stake 2,000 AVAX for time periods ranging from two weeks to one year. As of July 15, the network had 1,293 validators.)

“This will allow token holders to choose the rate at which AVAX reaches its capped supply,” developers note in the project’s tokenomics white paper. They also chart out distribution rates under two different scenarios — one in which 100 percent of tokens are staked (resulting in more rapid inflation), and one in which only 50 percent are staked. Fifty-seven percent of tokens were staked as of July 2022, setting inflation up to track with the more gradual schedule.

If you’d like to read the white paper — and enjoy advanced math — you can find it embedded above.